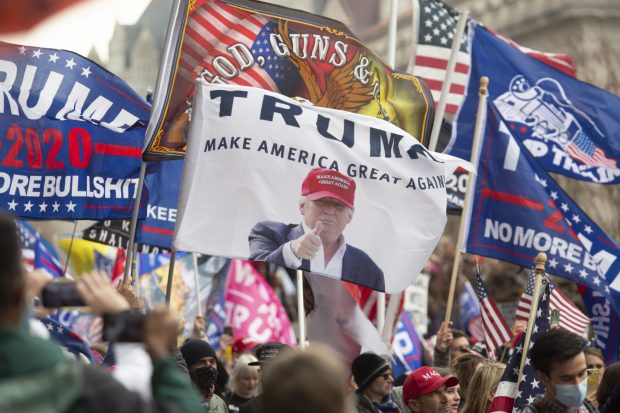 END_OF_DOCUMENT_TOKEN_TO_BE_REPLACED

“I’m living rent-free inside of Donald Trump’s brain, and it’s not a very nice place to be, I can tell you that.”

— Hillary Clinton, in an interview with Rachel Maddow, on President Trump’s fixation with her.

My prediction for Bernie: populist hero forever but hard to imagine him still being there at the convention.

John Skvarla, Secretary of the N.C. Department of Environment and Natural Resources, [bio] has suggested that he believes a theory promoted by World Net Daily contributor Jerome Corsi — one of the originators of Birtherism and a promoter of other conspiracy theories, including one that Pres. Obama is gay — that oil is not a finite resource created by centuries of compression of organic material but is a renewable resource created by the earth on an on-going basis, like wind or solar.

Skvarla is the head of the agency charged with regulating Duke Energy, which is responsible for the third-largest coal-ash spill in U.S. history, an on-going disaster that is still unfolding in North Carolina.

Never heard of it? You’re not alone. As Rachel Maddow says at the end of the segment above, “This North Carolina story, and this federal criminal investigation into what’s happening in North Carolina, is a terrible and amazing story from about a million different angles. Why the Beltway refuses to care about it, I do not know, but it cannot last long.”

Read more about the story here.

On Friday night, Rachel Maddow delivered a blistering reply to a letter from attorneys representing billionaire conservatives Charles and David Koch. While she has always been willing to make corrections on the show, she said, the Kochs’ current quibble is about a matter of actual verifiable fact and as such needs no correction.

END_OF_DOCUMENT_TOKEN_TO_BE_REPLACED

Mitt Romney’s deliberate attempt to big foot the news coverage of the protests and violence in North Africa elsewhere this week obscured the most important aspect of the story from a parochial American perspective, at least: the organized assault on the U.S. compound in Benghazi in which Ambassador Chris Stevens and three others were killed. In the video above, Rachel Maddow provides a tick-tock of the al Qaeda style attack in Benghazi .

Visit msnbc.com for breaking news, world news, and news about the economy

During a discussion about women’s pay on Sunday’s “Meet the Press,” Rachel Maddow attempted to state the fact that women are paid 77 cents for every dollar men are paid, but she could barely get a word in edgewise because of interruptions by Alex Castellanos, a Republican operative, who insisted that it was not true — that women and men are paid equally:

END_OF_DOCUMENT_TOKEN_TO_BE_REPLACED

If it’s true that, according to the Rove-Breitbart playbook, when your side is on defense you are losing, Fox’s Bill O’Reilly is losing the debate with MSNBC’s Rachel Maddow about his network’s use of racism to inflame and agitate its predominantly elderly white Republican viewers.

Maddow apparently got under O’Reilly’s skin last week when she did a story about race baiting on Fox that documented the network’s on-air personalities’ lies about Van Jones, ACORN, Shirley Sherrod, the New Black Panthers Party, illegal immigration and other racially charged stories.

The next night O’Reilly took to the airways in defense of his network. He rebutted the video evidence of his colleagues’ racially inflammatory comments with a succinct, “Nuh-UHH” — Fox can’t be racist, he suggested, because his ratings were higher than MSNBC’s, and everybody knows that highly rated shows can’t possibly feature racism.

This defense was the subject of much well-deserved derision the next day, which prompted O’Reilly to return to the air and resort to name-calling — Maddow is a “far left loon,” he said. He then repeated the much-derided defense that his network’s high ratings are irrefutably prima facie evidence that Fox is free of racism.

Maddow responded last night by noting that sharks must be more even less racist than Fox because “Shark Week” beat Fox in the ratings last week.

She followed up with a video retrospective of O’Reilly’s own on-air racist comments — which she offered as irrefutable proof that race baiting is what Fox does.

Visit msnbc.com for breaking news, world news, and news about the economy

Here’s a rough transcript of Maddow’s report — this was provided by MSNBC: