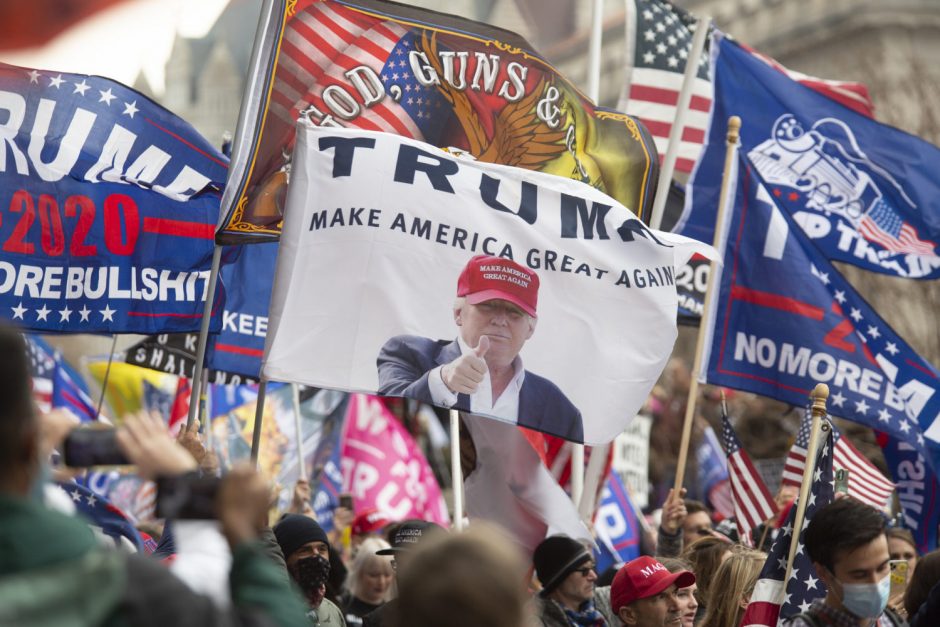 But before we talk with either of the officials, I asked to be here tonight my friend Steve Schmidt, who is not directly involved in these matters not an elected official. But he is somebody who has had clarity on this issue I think before a lot of the rest of us did. And this does feel like a crisis now. This does feel like a splitting point that has grown out of whatever is wrong in Republican politics and in the politics that have arisen around the former president.

And today with this call, even after the results of this audit showed that Trump lost worse than he thought, this call that this necessarily means the election results should be thrown out and Trump declared the winner, it does feel like a breaking point, a full on separation between election results and facts in a way that feels irrevocable.

And that feels unmooring and alarming to me as hilarious as I find it in the short run, but I found myself all day wanting to take to Steve Schmidt about what feels like a very precarious moment. I asked him to be here tonight.

Steve Schmidt, thank you so much for making time, my friend. I really appreciate it.

STEVE SCHMIDT, FORMER REPUBLICAN STRATEGIST: It`s great to be with you, Rachel. Thank you.

MADDOW: I wanted you to be here tonight, Steve, because I feel like you have been throwing bull`s-eyes in these proverbial darts match from the very beginning. I wanted to know if you are sort of your state of mind, whether you are reassured or comforted at all by the way things took turn today, or whether this feels ominous to you, the way it does to me and people like Mr. Kagan writing “The Washington Post.”

SCHMIDT: I think it`s extremely ominous, Rachel. I think we are in a crisis. It`s hard to overstate the magnitude of the crisis. I agree with Mr. Kagan that Donald Trump will certainly be the Republican nominee in 2024. We have an autocratic movement in this country. And one thing is certainly true. The Republican Party of late September 2021 is a profoundly more radical party than it was on Election Day, than it was on January 6th, than it was inauguration day.

And part of the strategy — and it`s important to understand — you see this with the chaos that could result from the debt ceiling — is they are trying both chaos at the same time where they are selling order. So, all right-wing authoritarian movements always do this. It`s how they come to power. They drive chaos through policies of cynicism and nihilism and then they promise to restore order with easy scapegoats.

It`s very important. We should never talk about these issues without mentions these are minority voters that are alleged to have fraudulently voted. That`s not so much hidden by a dog whistle as loudly screamed by the Trump people and lawyers. And so there is that aspect of it, number one. And two, when you have mainstream leaders supposedly like Elise Stefanik, imagine someone with the last name of Stefanik, engaging in replacement theory, engaging in white nationalism, white supremacist white replacement there in ads in her Albany district.

This is mainstream. The party is in open alliance with extremist elements, including the fascists that you saw outside the Capitol, white nationalist, and a bevy of other extremist groups. Certainly there is political violence in the country because the argument that Trump is making and so many of his allies is that civilization is going to collapse because of the hordes of minorities being imported to steal the birth right and the franchise of the American citizen.

It is evil. It is demagogic. It has been done before in history, the stigmatizing of people who are the weakest in a society, so scapegoat and to diffuse the blame from the problems that those that are — that are attacking them are responsible for creating in the first place. So, yeah, we`re in a dangerous moment, Rachel in the country and it`s going to get worse.

What are the options that are available if we decide to confront this as a country and do not take this — to not play this down, to recognize the threat here and the historical echoes you describe here in a way that is bone chilling? What does that look like? What is the opposite of appeasement?

SCHMIDT: Confrontation. What you did at your show brilliantly was this, and it puts you at the front of a fight that will determine whether we`re able to maintain the republic and the front of the fight is the sideways where the lie is confronted with the truth. That`s the battleground. And it plays out in a million ways.

But a democracy cannot survive in a world where the lie and the truth stand equally. The system that we have is the based on a compact that requires faith and belief and trust. It`s how we share power with people that we disagree with. We acknowledge that we live in a complex world where people have different perspectives. And we have to accommodate those views.

In the 21st century, I believe that there was a consensus that has unraveled in a startlingly short period of time that you can trace back to the beginning of the country. In the name of political power, also the same people claiming that they`re doing it in the name of freedom are saying that the preservation of freedom means maintaining our power, not necessarily abiding the results of the election.

And when you get to that territory you`re in a scary space. It`s essential to remember to understand one thing, and this has to be brought forward into the debate. Despite all the flaws of American democracy or any democracy, democracies are the only system of government that has ever existed in the history of humanity that puts the individual human being on top of the power of the state. Every other system subordinates the dignity of the human being to the power of the state for the purposes of the state, often controlled by self–interested, corrupt minority.

So this is the most profound moral issue that you could possibly talk about on any given evening in this country, because it goes to the heart of the American idea, the embrace of humanism, of natural rights, of pluralism and this idea that anybody can be an American, that we can all stand equal, co- equally in a society under the rule of law where we all get a say and get to participate.

And that is what is being vandalized and attacked and successfully so. They are on the march. They are ascendant. They`ve raised more money than the Democrats. Republicans have tremendous advantages heading into this next midterm election.

So we are indeed, as you have pointed out at a very frightening moment.

MADDOW: Steve Schmidt, political strategist and my friend who I most wanted to talk to today about in for your clarity and your seriousness of purpose on this — Steve, thank you for being here tonight. I really appreciate it.