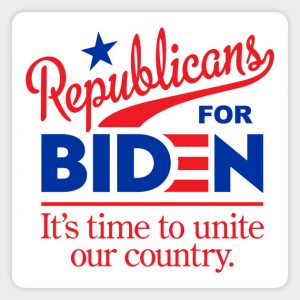 From Forbes: More than two dozen former Republican members of Congress officially announced on Monday, mere hours before the start of the Republican National Convention, that they are endorsing Joe Biden, who aims to build a wide-ranging coalition in hopes of defeating President Donald Trump in November.

“Over 70 former Republican national security officials including ex-CIA and FBI chiefs will endorse Democratic presidential candidate Joe Biden on Friday while launching a scathing indictment of President Donald Trump, calling him corrupt and unfit to serve,” Reuters reports. New York Times: “The new letter, released just hours before Mr. Biden formally accepts the nomination, lays out a 10-point indictment of Mr. Trump’s actions, accusing him of undermining the rule of law, aligning himself with dictators and engaging ‘in corrupt behavior that renders him unfit to serve as president.’”

Fifty-eight U.S. mayors announced their endorsements of Pete Buttigieg in a USA Today op-ed, giving the South Bend, Indiana mayor a boost of institutional support for his presidential campaign.

“Among the small number of American newspapers that have embraced Donald Trump’s campaign, there is one, in particular, that stands out. It is called the Crusader — and it is the official newspaper of the Ku Klux Klan,” the Washington Post reports. “Under the banner ‘Make America Great Again,’ the paper’s current issue devoted its entire front page to a lengthy defense of Trump’s message — an embrace some have labeled a de facto endorsement.”

We endorse Trump for president in the belief he can bring about fundamental change — not alone, but in partnership with his party and a coalition of others drawn from every walk of life who think we can do better than what government has offered under eight years of President Obama.

Vogue has no history of political endorsements. Editors in chief have made their opinions known from time to time, but the magazine has never spoken in an election with a single voice. Given the profound stakes of this one, and the history that stands to be made, we feel that should change. Vogue endorses Hillary Clinton for president of the United States.

The 2016 election is not a choice between two candidates equally fit to serve, or a choice between the ideology of two parties. Trump is a unique threat and in an election where supporting third party candidates splits a national vote, we see but one option. Clinton may be the second least popular major party candidate in 50 years but she is also one of the most qualified candidates in history. And ultimately, if it isn’t her, it’s him. And that would be a disaster for America and the world.

Mr. Trump’s demerits are well-documented — in print, on video, on the debate stage. And they are legion, so the CliffsNotes version will do: The billionaire Republican candidate is a boastful, self-centered egomaniac who lacks a record of public service or familiarity with the issues. Indeed, he clearly seems to lack any political convictions whatsoever, except those of convenience. He’s the star of this political reality show of his own making, a sick parody of a real political contest. He’s the ringmaster of a circus that attempts to conceal his lack of gravity by relying on the entertainment value of insults, exaggerations, lies and promises completely devoid of credibility and substance, characterized by his pie-in-the-sky vow to “make America great again.”

— From the Miami Herald’s endorsement of Hillary Clinton

I opened my Sunday Miami Herald to see a ringing endorsement of Hillary Clinton covering the front page of the editorial section headlined “We’re With Her.” Then I went online to snag the story for this blog and the headline was “The Miami Herald recommends Hillary Clinton for president of the United States.”

Hmmmm, not so ringing, maybe.

But fortunately, the editorial was the same. It starts this way:

Let’s make clear what the 2016 presidential election isn’t about:

It is not about choosing between a bad candidate and a worse one. The narrative that Hillary Clinton is the lesser of two evils is patently wrong. Ms. Clinton is a pragmatic, tough-minded woman of accomplishment and political conviction with a demonstrated mastery of policy. She is politically flawed. However, Donald Trump is a damaged human being.

END_OF_DOCUMENT_TOKEN_TO_BE_REPLACED

Vengeful, dishonest and impulsive, Trump is no Romney. This is why Hillary Clinton is the safest candidate for voters to choose in a complex world. Terrible leaders can knock nations off course. Venezuela is falling apart because of the obstinance and delusions of Hugo Chávez and his successor. Argentina is finally coming out of the chaos created by Cristina Kirchner and several of her predecessors. Trump could be our Chávez, our Kirchner. We cannot take that risk.

— The San Diego Union-Tribune, which has endorsed Republicans for president from 1868 through 2012, today endorsed Hillary Clinton.