“They condemn law breakers while breaking the law.“ 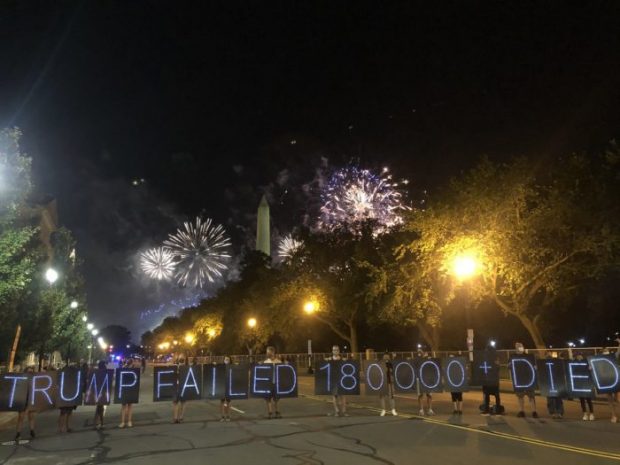 Outside the White House, just after President Trump concluded his speech accepting the Republican presidential nomination.

Vox: “It’s a moment that encapsulates what amounted to a week of gaslighting on Covid-19 by Trump and the Republican convention — an attempt to make America think that a president who had so clearly failed was in fact a victory for the US.”

— President Trump, in an interview with the New York Times, when asked about his second term agenda if re-elected.

As a backdrop to the just-ended Republican convention, Gallup routinely asks an open-ended question about what’s the most important problem facing the country today. In August, 35% said something about the coronavirus pandemic, 12% named the economy, and 10% said race relations. Only 4% thought crime was most important.

“It’s a sign that the rhetoric doesn’t remotely match the record.”

— John Avlon notes that President Trump will have put three times as many African Americans on stage at the Republican National Convention as he has appointed to his West Wing, Cabinet and US Attorney’s offices … combined.

“The more chaos and anarchy and vandalism and violence reigns, the better it is for the very clear choice on who’s best on public safety and law and order.”

— Kellyanne Conway, making the case on Fox News that the killings of peaceful protesters will benefit President Trump politically.

“I don’t think there should be any debates … I wouldn’t legitimize a conversation with him, nor a debate in terms of the presidency of the United States.”

— Sen. Lindsey Graham (R-SC), quoted by Axios, adding that he believes the conspiracy theory is “very much a threat.