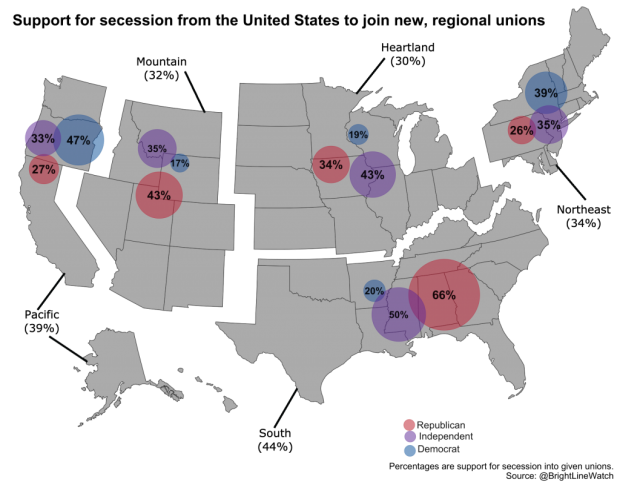 “Republicans are most secessionist in the South and Mountain regions whereas it is Democrats on the West Coast and in the Northeast. In the narrowly divided Heartland region, it is partisan independents who find the idea most attractive,” according to the researchers.

The biggest surprise was that two-thirds of Southerner Republicans favor secession, up from 50 percent in the previous survey. Support for secession among Republicans in the Mountain region also increased, from 36 percent to 43 percent.

Forty-seven percent of Western Democrats favored creating a new country along the Pacific coast, from Mexico to Canada – up 6 points from the previous survey. Thirty-nine percent of Northeaster Democrats favor seceding (up 5 points). In the Heartland, support for secession rose 9 points, to forty-three percent, in the Heartland.

Bottom line from the survey team: “The broad and increasing willingness of respondents to embrace these alternatives is a cause for concern.”