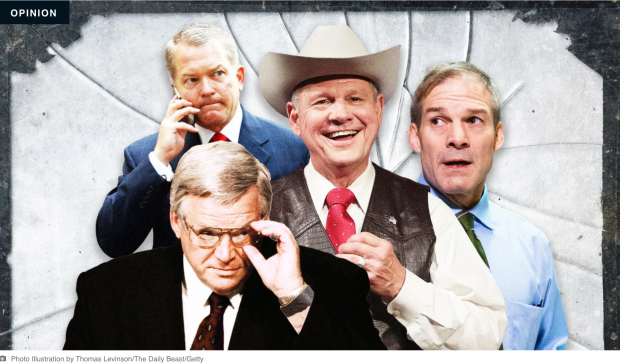 The Daily Beast has an interesting article on the recent trend of Republicans calling anyone who disagrees with them a “pedo” or “groomer,” implying that if you disagree on policy it’s because you’re a pervert. Well, it takes on to know one, as they say, and according to the Beast, there’s lots of pedos and groomers in the GOP closet.

The list is not long, but it’s undeniable: Dennis Hastert, Mark Foley, Judge Roy Moore and Rep. Jim Jordan’s failure to report abuse when he was a wrestling coach at Ohio State University.

Maybe Republicans know something we don’t, have something up their sleeve we can’t see, or have nothing else to say. It was clear that the party had dispensed with any coherent ideology on which to run when they declined to even put forward a platform in 2016.

Meanwhile Rep. Marjoie Taylor Greene—notorious before she even took office for her QAnon sympathies—is screaming that anyone who votes for the confirmation of Judge Ketanji Brown Jackson is “pro-pedophile,” including three Republicans.

Republicans are projecting so loudly, no one can hear anything else they’re saying. They’re widely expected to win big in the midterm elections, but if they stick with this crackpot strategy, they’re going to snatch defeat from the jaws of victory. Have at it.