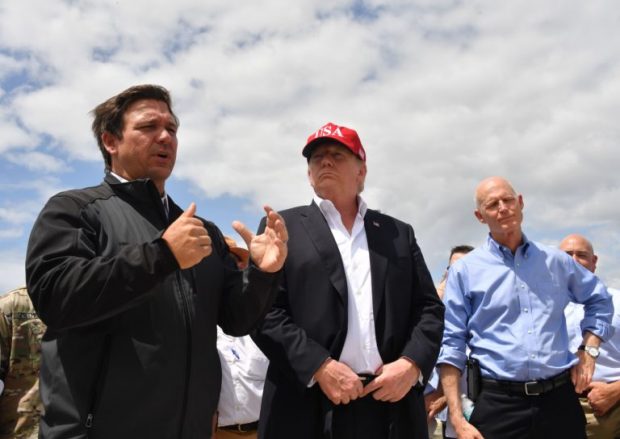 US President Donald Trump and Florida US Sen. Rick Scott (R) listen to Florida Gov. Ron DeSantis (L) during a tour of the Edgar Hoover Dike on Lake Okeechobee in Florida, March 29, 2019. (Photo by Nicholas Kamm/AFP)

Talk about your irony, the New York Post reports that New York City is loading migrants — many of them Venezuelans — into vans and shipping them to Florida to help with hurricane recovery efforts:

Scores of Venezuelan migrants in New York City are hopping on vans to head down to Florida for Hurricane Ian clean-up, they told The Post.

The migrants had scant information about whom they would be working for, but they still piled into vans in Queens that they said were headed to the Sunshine State over the weekend.

“They want us for hurricane cleanup, we’d get paid $15 an hour, overtime and $15 for food daily, I think,” said Javier Moreno, 37, noting that a woman named Camila “from an organization” approached him with a flier.

“Perla” has been replaced by “Camila,” but printed fliers and vague promises are still involved. We wonder if this presages a sea change in Gov. Ron DeSantis’ feelings about migrants, similar to how he is now FOR federal emergency money for Hurricane Ian, whereas he (and the odious Marco Rubio and creepy Rick Scott) was AGAINST it a decade ago for victims of Hurricane Sandy in New York.