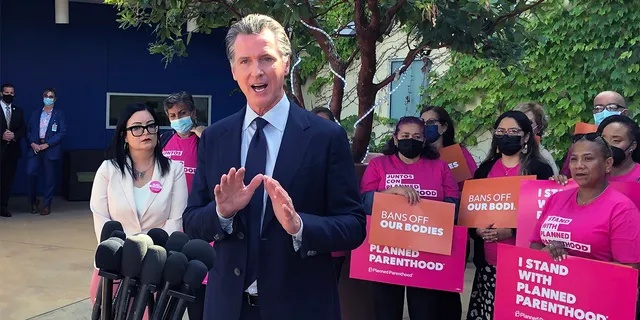 Gov. Gavin Newsom, D-Calif., is running for reelection, so it’s unlikely that the I don’t think the Democratic Party he’s criticizing is the one he leads in California. It must be the national party led by Pres. Biden and V.P. Kamala Harris, Newsom’s former state attorney general. He certainly sounds like a candidate in the 2024 Democratic presidential primary.

Yes, they’re winning. They are. They have been. Let’s acknowledge that. We need to stand up. Where’s the counteroffensive? This never happened in our lifetime. They’re taking away rights that have been affirmed over and over again and well-established. They’re taking them away. Wake up, America.

Consistently, the one group of people that over and over and over again oppose all of those supports [sic], and they claim to be pro-life? They’re pro-birth. That’s all this is about. It’s the pro-birth party. Then you are on your own.