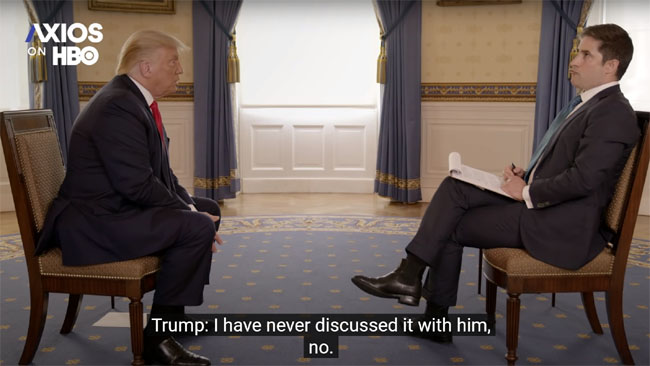 Trump has had eight conversations with Vladimir Putin since he learned that Russia paid Taliban militants to kill U.S. troops in Afghanistan. But during an interview with Axios’ Jonathan Swan on Tuesday Trump admitted that in all these conversations with Putin he never broached the subject of the bounties.

“I have never discussed it with him,” Trump said. He also resorted to his tried and true tropes, calling the assertion that Putin had placed hits on American troops “fake news” and shifting responsibility for ignoring the issue to subordinates, saying the intelligence hadn’t “reached” his desk – as if that would stop him from acting on something he’d seen on Fox News that he could use to his political advantage.

The evidence that Putin has some sort of hold over Trump has become so obvious that it ought to be impossible now for Republicans, led by Sen. Mitch McConnell, to ignore.

One thought on “Trump on Putin’s Bounties on US Troops: ‘I Have Never Discussed It with Him’”