“America’s economy grew much faster than previously thought in the third quarter, a sign that the Federal Reserve’s battle to cool the economy to fight inflation is having only limited impact,” CNN reports. “The Commerce Department’s final reading Thursday morning showed gross domestic product, the broadest measure of the US economy, grew at an annual pace of 3.2% between July and September. That was above the 2.9% estimate from a month ago.”

The U.S. economy expanded at a 2.6% annual rate in the third quarter, ending the streak of back-to-back contractions that raised fears the country had entered a recession, Axios reports.

“Gross domestic product unexpectedly declined 1.4% in the first quarter, marking an abrupt reversal for an economy coming off its best performance since 1984,” CNBC reports. “The negative growth rate missed even the subdued Dow Jones estimate of a 1% gain for the quarter.” “Rising omicron infections to start the year hampered activity across the board, while inflation surging at a level not seen since the early 1980s and the Russia invasion of Ukraine also contributed to the economic stasis.” 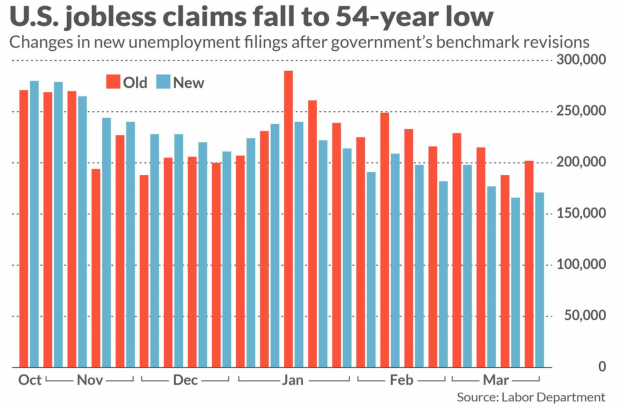 An estimated 166,000 Americans filed initial unemployment claims last week, down nearly 5,000 claims from the previous week and better than analyst projections of 200,000. It is the lowest figure since November 1968 (and the second-lowest since weekly reporting began in January 1967). Continuing claims rose slightly by 17,000 to 1.52 million, coming two years after the number of claims reached an all-time high of 6.1 million in April 2020.

The decline shows employers are limiting layoffs in a tight labor market. Roughly 1.8 job openings are available for every unemployed worker; the unemployment rate stood at 3.6% in March, just above the prepandemic level of 3.5%. Nearly 4.4 million workers left their jobs in February, a number that has held steady as employers try to fill job openings.

The figure represents the third consecutive week that new claims fell below 200,000.

“The number of Americans applying for unemployment benefits last week fell to its lowest level in 52 years as the U.S. job market continues to show strength in the midst of rising costs and an ongoing virus pandemic,” the AP reports. “Jobless claims fell by 28,000 to 187,000 for the week ending March 19, the lowest since September of 1969.”

“Republicans are setting a trap for President Biden. They’re demanding he take actions that will raise gasoline prices — with obvious plans to attack him politically after the prices rise.”

“U.S. private employers hired more workers than expected in February and data for the prior month was revised sharply higher to show strong job gains instead of losses, aligning with other reports that have painted an upbeat picture of the labor market,” Reuters reports.