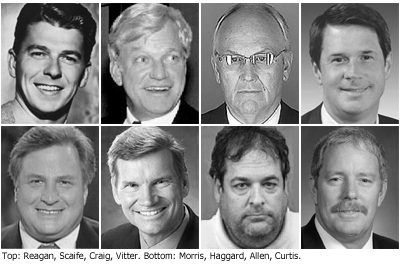 At the outset of putting together the list of nominees for the GOP Adulterers Hall of Fame this year, Richard Melon Scaife was far and away the top candidate for the top spot. The 75-year-old billionaire bankrolled the $2.3 million “Arkansas Project” to dig up dirt on the Clintons’ marriage in the 1990s — at the same time that he was ditching his first wife in order to marry his mistress — is likely to lose half his $1.3 billion fortune in a divorce settlement with his second wife (the aforementioned former mistress) because she caught him having an affair with a 43-year-old former prostitute. As GOP adulteries go, there are few more vivid examples than that.

But Scaife got edged after we inadvertently ran across at least one adulterous period in the life of Ronald Reagan — and, no, Nancy was not involved. In 1938, when Reagan started dating his future wife, actress Jane Wyman, she was married to someone else. About 10 years later, when his marriage to Wyman was coming undone, Reagan lived on and off in the Garden of Allah Hotel on the Sunset Strip, where, he would later brag, he often woke up next to women whose names he couldn’t remember.

Also on this year’s list — Sen. David Vitter, the Louisiana family values huckster whose long history of consorting with prostitutes was revealed last year; Huckabee advisor Dick Morris, who was caught in the 1990s having his toes sucked by a prostitute — and no less than four married male homophobes who got caught having sex with men (or trying to) — including three who paid for sex (or tried to).

It’s not the sex, it’s the hypocrisy.

Nominees to Pensito Review’s GOP Adulterers Hall of Fame must be exemplars of conservative politicians or opinion leaders who promote family values and, especially, the sanctity of marriage, who also have sex outside their marriages.

Pensito Review’s GOP Adulterers Hall of Fame is a spin-off one of our most popular articles, The Real Threat to Marriage: Top 10 GOP Adulterers, which was published in June 2006.