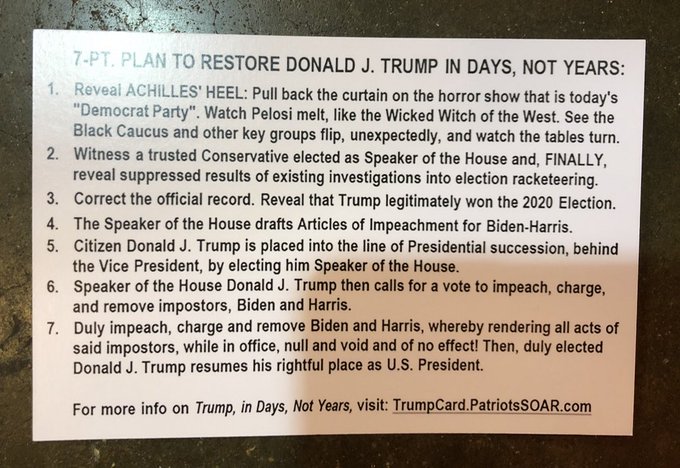 Step two is “witness a trusted Conservative elected as Speaker of the House and, FINALLY, reveal suppressed results of existing investigations into election racketeering” with step three being to: “correct the official record. Reveal that Trump legitimately won the 2020 Election”.

The next steps of the plan are to have the new “Speaker of the House drafts Articles of Impeachment for Biden-Harris” and then for Mr Trump to be “placed into the line of Presidential succession, behind the Vice President, by electing him Speaker of the House”.

“Speaker of the House Donald J Trump then calls for a vote to impeach, charge, and remove impostors, Biden and Harris,” the card given to CPAC visitors states. “Duly impeach, charge and remove Biden and Harris, whereby rendering all acts of said impostors, while in office, null and void and of no effect! Then, duly elected Donald J Trump resumes his rightful place as US President,” the card concludes.