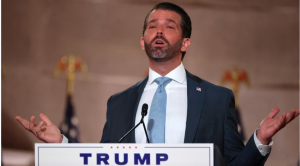 Au contraire, mon frere, they do have a platform. It’s called LYING.

On the first night of the GOP Convention on Monday, Republicans warned of dark, dire consequences should Democrats assume power, and sought to portray President Trump’s record as one of unalloyed success in ways that seemed to rewrite history, including claiming that his response to the pandemic was swift and effective.

And what was going on with Don Jr.’s eyes?