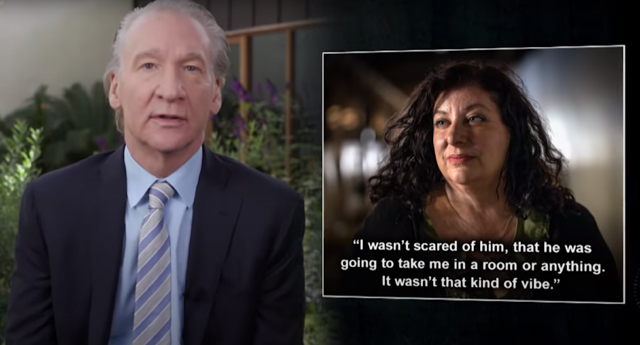 On his “Real Time” show on HBO last night, Bill Maher urged Democrats not to fall into Republicans’ trap and obsess over an accusation of sexual assault against Biden from a former staffer. Their ploy is especially insidious because Republicans have ignored the fact that Trump has been accused of 26 incidents of “unwanted sexual contact” and 43 instances of inappropriate behavior.

And finally, New Rule: Just because Fox News is obsessed with the Biden sex-assault allegation, it doesn’t mean the rest of us have to be. You may have noticed that Donald Trump has one move – accuse you of the very thing he’s guilty of.

“Puppet? No puppet. You’re the puppet.” Remember that one?

Okay, well now it’s “Joe Biden grabs women by the pussy.” Not that he even needs to say it. The “liberal” media and liberal party is doing — exactly what Republicans want: for us to go down the rabbit hole of “Joe Biden, sex monster.”

So now everybody’s investigating, but there is no fact finding here. It’s a he said-she said … she said something else entirely. Yes, Biden’s accuser, Tara Reade, has been contradicted by multiple people. Most importantly, Tara Reade.

Just last year, she said of Biden, “I wasn’t scared of him, that he was going to take me in a room or anything. It wasn’t that kind of vibe.”

She suggested she had filed a sex harassment report. Now, she says she didn’t. She says she was fired by Biden’s office, but in deleted posts she said she left because quote, “I love Russia with all my heart. President Putin scares the power elite in America because he is a compassionate, caring, visionary leader. His obvious reverence for women, children and animals, and his ability with sports, is intoxicating to American women.”

What?! What the fuck? We’re letting this person change the subject from “Donald Trump, lethal incompetent” to “Joe Biden, sex monster?” She literally wrote a love letter to the murderer trying to keep Biden from the White House.

Yet the New York Times is calling for the DNC to establish a truth panel on this. Truth panel, huh? Which part? Putin’s reverence for animals or how intoxicating he is to women?

And Democrats are coalescing around the position that this accusation must be thoroughly vetted for the party to keep its credibility.

Well, you know credibility certainly is a problem for the party on this issue, mostly because they “‘woke’ themselves into a corner when they adopted “Believe women” as their slogan when it should always have been “Take accusations seriously.”

Kirsten Gillibrand said of the Al Franken allegations, “The women who came forward felt it was sexual harassment, so it was.” That was never tenable because believing everything doesn’t make you noble, iIt makes you gullible and leaves us with the world where Republicans don’t care about this stuff, so it’s just a unilateral weapon that is used only against Democrats.

Trump rides the bus with Billy Bush. We throw Al Franken under it.

Democrats are the party of choice. We can choose to completely fuck ourselves over this. I know it’s a sex scandal and, in normal times, that’s what we do instead of issues, but there are actually some pretty big problems going on right now. I don’t know if you noticed, but America has turned into a failed state that does a worse job keeping it citizens alive during a pandemic than Cambodia.

And to me, that’s a little more important than Tara Reade achieving closure. She says Biden attacked her, and he says he didn’t. Those are their positions. How about this for yours? Don’t know, never will, don’t care.

I care in the macro about women being attacked, of course, but on this one, I’m with Bogey, who said, “I’m no good at being noble, but it doesn’t take much to see that the problems of three little people don’t amount to a hill of beans in this crazy world.”

Everybody says, “We need to do everything we can to defeat Trump.” Yeah, except anything.

Well, I’m no good at being noble either but if in 1993 Joe Biden had grabbed my nuts in a corridor — and I was in Washington that year — and I had this knowledge and revealing it could hurt the guy running against Trump, I’d save it for my memoirs.

I’d like to think that I’d have a little more perspective. We have a president who says, “Drink bleach.” Geez, you waited 27 years. It couldn’t hold a few more months?

That’s what I’d like to ask Ms. Reade. “Why now?” I’m not saying why not 27 years ago. I understand it can take victims years to come forward. I’m saying, why not before Super Tuesday? Why not last fall when we still had a dozen other candidates to choose from? Why wait until Biden is our only hope against Trump and then take him down?”

This story is gathering an importance it should not have. There is so much at stake in this next election. The entire world needs to be put back together like Humpty Dumpty.

Why should one person’s victimhood trump everyone else’s?