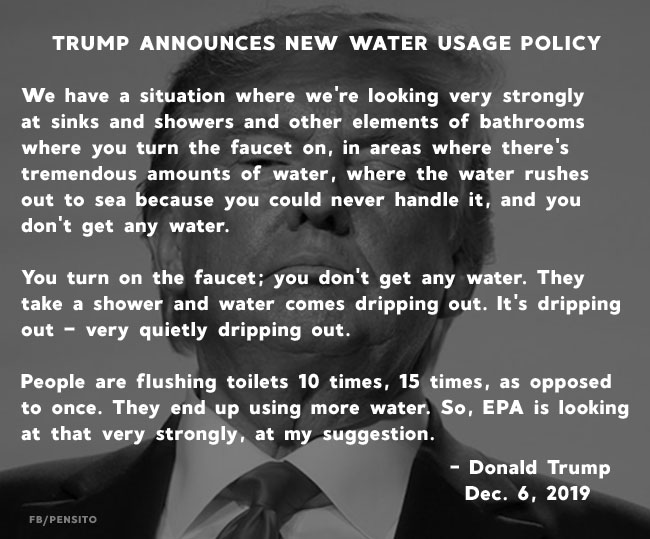 We have a situation where we’re looking very strongly at sinks and showers and other elements of bathrooms where you turn the faucet on — in areas where there’s tremendous amounts of water, where the water rushes out to sea because you could never handle it — and you don’t get any water. You turn on the faucet; you don’t get any water. They take a shower and water comes dripping out. It’s dripping out — very quietly dripping out. People are flushing toilets 10 times, 15 times, as opposed to once. They end up using more water. So, EPA is looking at that very strongly, at my suggestion.

You go into a new building or a new house or a new home, and they have standards, “Oh, you don’t get water.” You can’t wash your hands, practically, there’s so little water comes out of the faucet. And the end result is you leave the faucet on and it takes you much longer to wash your hands. You end up using the same amount of water.

So we’re looking at, very seriously, at opening up the standard. And there may be some areas where we’ll go the other route — desert areas. But for the most part, you have many states where they have so much water that it comes down — it’s called rain — (laughter) — that they don’t know — they don’t know what to do with it.

So we’re going to be opening up that, I believe. And we’re looking at changing the standards very soon. And that’s a little bit like the lightbulb, where you get a bulb that’s better for much less money. We go back — but you have the other alternative. And you’ll keep the other alternative with sinks and showers, et cetera, too. But that’s been a big problem.

So a lot — a lot of the things we do are based on common sense. Somebody said, “Is that a conservative, is it a liberal thing? Is it — what is it? What are we doing?” I said, “It’s a commonsense thing.” In so many — so many of the things that we do, it’s based on common sense, like the car. The car will end up with that net tremendous saving, environmentally, when you think of all the cars, the old cars, that will come off the road. You’ll end up with a very — a better car. And you’ll end up — environmentally, it will be ultimately much better.

The listeners were the problem, says Trump, in retrospect.
Without the listeners, he could speak his mind, unchecked.
Now that will stop,
No one will eavesdrop,
And all Trump’s calls with foreign leaders will be absolutely “perfect.”

“Vacancies at all levels go unfilled and officers are increasingly wondering whether it is safe to express concerns about policy, even behind closed doors.”

— Former U.S. Ambassador to Ukraine Marie Yovanovitch said Wednesday that the State Department is “in trouble” and that the department is being “hollowed out,” CNN reports.

“That the Democrats are crooked … that they shouldn’t have brought impeachment and my poll numbers are 10 points higher.”

— President Trump, when asked if he learned any lessons from being impeached.

A new St. Pete Polls survey in Florida shows Michael Bloomberg leading the Democratic primary race with 27%, followed by Joe Biden at 26%, Pete Buttigieg at 11%, Bernie Sanders at 10%, Amy Klobuchar at 9% and Elizabeth Warren at 5%.

“President Trump will be the guest of honor at a Saturday fundraiser at the palatial Palm Beach estate of billionaire Nelson Peltz,” the Washington Post reports. “Trump’s fellow guests: donors who gave $580,600 per couple to support the president’s reelection, making it the most expensive such fundraising event since Trump took office.”

Politico: “The surprise reprogramming of another $3.8 billion… means the Pentagon will have forked over nearly $10 billion since last year to help pay for President Trump’s border wall.”

A new Morning Consult poll finds Bernie Sanders leading the Democratic presidential race nationally with 29%, followed by Joe Biden at 19%, Mike Bloomberg at 18%, Pete Buttigieg at 11%, Elizabeth Warren at 10% and Amy Klobuchar at 5%.

Associated Press: “Pro-Trump groups raised more than $60 million in January and have more than $200 million on hand for this year’s general election, shattering fundraising records on the path toward a goal of raising $1 billion this cycle. The Republican National Committee and President Donald Trump’s campaign have raised more than $525 million since the start of 2019 together with two joint-fundraising committees.”