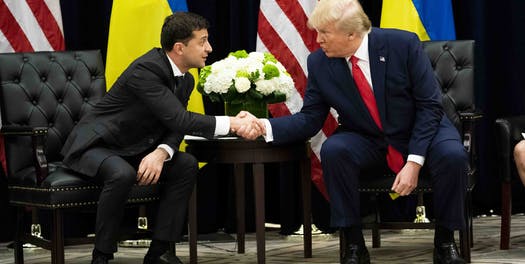 §30121. Contributions and donations by foreign nationals
(a) Prohibition
It shall be unlawful for-

With sexual assaults on women his past is rife,
He didn’t even spend his anniversary with his wife.
Here’s one more reason women
Should not be voting for him:
Trump’s the first president to attend the March for Life.

— A recording reviewed by ABC News appears to capture President Trump telling associates he wanted the then-U.S. ambassador to Ukraine Marie Yovanovitch fired while speaking at a small gathering that included Lev Parnas and Igor Fruman — two former business associates of Trump’s personal lawyer Rudy Giuliani who have since been indicted in New York.

“If you find him guilty, you must find that he be removed. Because right matters. And the truth matters. Otherwise we are lost.”

“Everyday Americans know what a fair trial is. And that includes witnesses, it includes testimony, it includes both sides having a fair shot at presenting their case. And if they don’t see that, then they’ll say, ‘Well, yeah, he got off, but it’s because it was rigged.’”

“The Constitution is not a suicide pact. It does not leave us stuck with presidents who abuse their power in unforeseen ways that threaten our security and democracy.”

“Starting with The Five, the network’s early evening roundtable commentary show, and continuing throughout the evening, Fox News broadcast portions of screen-in-screen video of the trial. But instead of playing the audio, network hosts provided the normal Trumpian spin. So while someone who just looked at the screen may have concluded Fox News was covering the trial, in fact it wasn’t covering it at all.”

The Pentagon has confirmed that 34 U.S. service members were diagnosed with traumatic brain injuries after the Iranian missile strike in Iraq. Eight of them were flown back to the United States for medical treatment, CNN reports. President Trump originally said there were no casualties.

A new Reuters/Ipsos poll finds 72% of Americans agreed that the Senate impeachment trial “should allow witnesses with firsthand knowledge of the impeachment charges to testify,” including 84% of Democrats and 69% of Republicans. Also interesting: “About 44% of adults in the United States say Trump should be removed from office, another 15% say he should be reprimanded formally with a congressional censure, and 31% said the charges should be dismissed.”

The Bulletin of Atomic Scientists moved the “Doomsday Clock” to 100 seconds before midnight, the closest it’s ever been to the metaphorical point of the Earth’s destruction. From the statement: “Humanity continues to face two simultaneous existential dangers—nuclear war and climate change—that are compounded by a threat multiplier, cyber-enabled information warfare, that undercuts society’s ability to respond. The international security situation is dire, not just because these threats exist, but because world leaders have allowed the international political infrastructure for managing them to erode.”

Yesterday was Donald and Melania Trump’s 15th wedding anniversary, but Kate Bennett noticed that neither has ever said anything about their anniversary publicly since Trump took office.

A new Pew Research survey found that 51% say the outcome of the Senate trial should be President Trump’s removal from office, while 46% say the result should lead to Trump remaining in office.